Today is the last day of Black History Month. So let's get to it.

Smokey Robinson - "Being With You"

Johnny Cash was born 84 years ago today.  So this post will focus on films about gettin' paid.  (Because biopics or films about musicians would have been expected.)

"Show me the money!" - Rod Tidwell 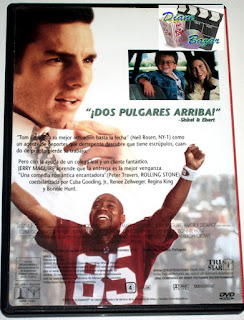 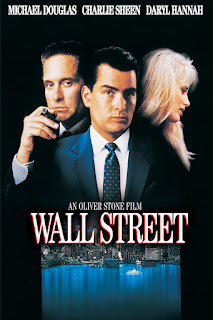 "In the casino, the cardinal rule is to keep them playing and to keep them coming back. The longer they play, the more they lose, and in the end, we get it all."
- Sam Rothstein 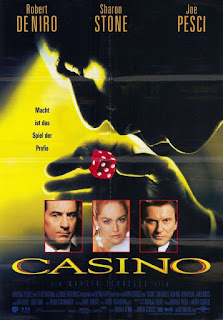 Brewster's Millions (1985): Richard Pryor as Montgomery Brewster, a minor league pitcher who has to spend $30 million in 30 days to inherit $300 million.  John Candy portrays she who is wooed catcher and friend, Spike Nolan.

"Monty, this is Hackensack, New Jersey. No scout comes here, you understand that. Trains are going through the outfield right now. But you strike this guy out, I'll take you with me tonight and get you drunk, that's a promise."
- Spike Nolan 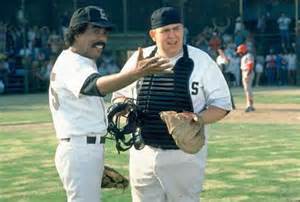 The Hoax (2006): Richard Gere stars as Clifford Irving, who sold a bogus biography of Howard Hughes in the early 1970's. Alfred Molina as friend and accomplice, Dick Suskind. Marcia Gay Harden portrays she who had already been wooed. 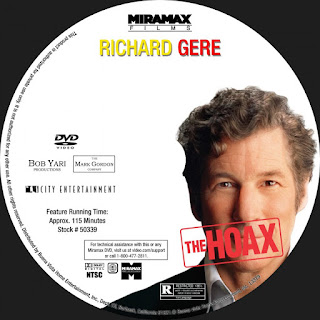 I leave you with this:

Greetings, readers.  (Because greeting people who aren't reading this would be pointless.)

Today marks the 36th anniversary of the Miracle on Ice: a team of U.S. amateurs upsetting the Soviet Union's hockey team in the Lake Placid Olympics.

But wait...  Isn't this Music Monday?  Let's see what legendary pianist / composer Frederic Chopin (born on February 22, 1810) has to say about that:


I leave you with this: 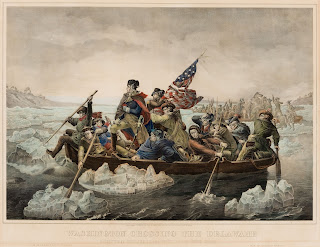 Benicio Del Toro turned 49 today.  So let's get to it.

Fear and Loathing in Las Vegas (1998):  Based on the book by Hunter S. Thompson.  Del Toro plays Dr. Gonzo, lawyer and friend of journalist Raoul Duke (Johnny Depp).  It's not a film for everybody, as the duo spend much of their time under the influence of drugs.  But I thought it was an entertaining film. 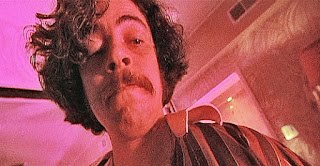 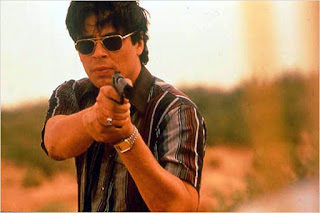 This is a really good film in some respects: acting, suspense, etc.  But there are a couple eye-roll inducing writing mistakes and it's a bit too political.  Also, the ending seems lifted from Traffic.

So I'm thinking I'll do the A to Z thing in April.  I have done A to Z type stuff in other venues, other formats.  But I had signed up for the Lost & Found blog hop and submitted "Missing".  Apparently I broke the rules so I got deleted.  Maybe this one will go better.

Today is Susan B. Anthony's birthday.  She is known for her work as an abolitionist and a campaigner for women's rights, as well as for being honored on a dollar coin. Though some people suspect the latter may have been a result of the other stuff. 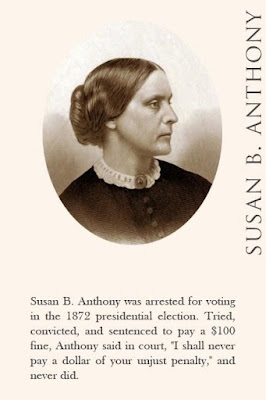 Helen Reddy: "I Am Woman", with Spanish subtitles.

I leave you with Marvin Gaye's version of "Abraham, Martin and John":

Posted by Elliptical Man at 2:44 PM No comments:

The Day Has Arrived

I am referring, of course, to the 87th anniversary of the St. Valentine's Day Massacre.  Five members of Bugs Moran's North Side gang and two collaborators were gunned down in a Chicago warehouse.  Moran was en route to the warehouse and missed being one of the victims by only a few minutes.  Al Capone's South Side gang is widely believed to have been responsible, though the shooters were never apprehended. 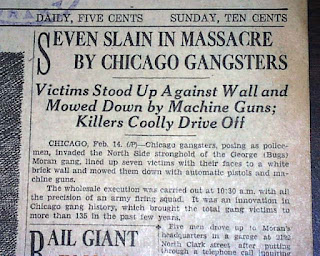 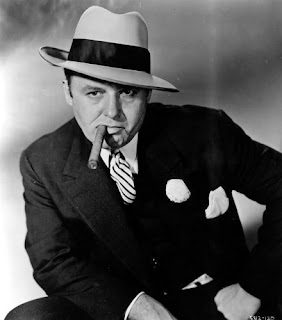 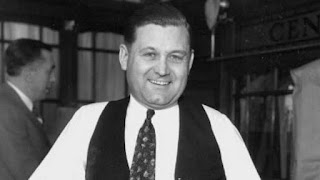 I leave you with Chet Baker's rendition of "My Funny Valentine":

Posted by Elliptical Man at 1:46 PM No comments: 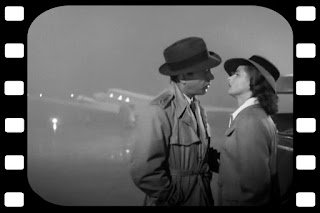 Set in Casablanca, Morocco during the early days of World War II, an American expatriate meets a former lover, with unforeseen complications. 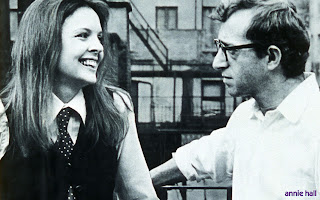 "After that it got pretty late, and we both had to go, but it was great seeing Annie again. I... I realized what a terrific person she was, and... and how much fun it was just knowing her; and I... I, I thought of that old joke, y'know, the, this... this guy goes to a psychiatrist and says, "Doc, uh, my brother's crazy; he thinks he's a chicken." And, uh, the doctor says, "Well, why don't you turn him in?" The guy says, "I would, but I need the eggs." Well, I guess that's pretty much now how I feel about relationships; y'know, they're totally irrational, and crazy, and absurd, and... but, uh, I guess we keep goin' through it because, uh, most of us... need the eggs."
- Alvy Singer 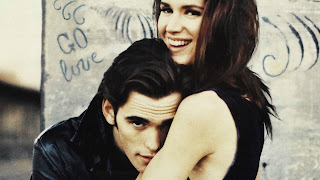 A pharmacy-robbing dope fiend and his crew pop pills and evade the law.

"Diane was my wife. I loved her, and she loved dope. So we made a good couple."
- Bob 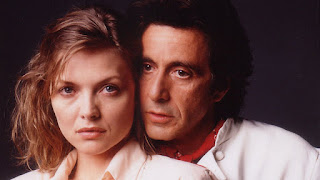 Johnny has just been released from prison, and gets a job in a café beside waitress Frankie.

"Why are you doing this?" - Frankie
"Everything I want is in this room." - Johnny 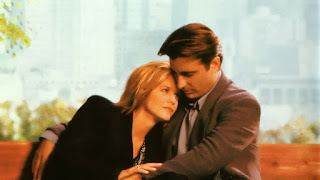 An airline pilot and his wife are forced to face the consequences of her alcoholism...

Somebody commented that the songs I chose for Music Monday were all sad songs. So I hope people appreciate the (relative) optimism of this list.

(credit to IMDb for the one-sentence summaries)
Posted by Elliptical Man at 4:23 PM 4 comments:

In keeping with this week's theme, let us turn to the baseball world:

Ellis Valentine - Major League right fielder from the mid-1970's to the mid-1980's, he achieved most of his success with the Montreal Expos (1975 - 81).  In 1977 he was an All-Star and the following season he won a Gold Glove.  He was known for his strong, yet accurate throwing arm.

"After retiring from baseball, Valentine took a job with Avis Rent-a-Car earning $4.25 per hour."

Having battled drug and alcohol addiction, he would later become a drug counselor to help others with their issues. 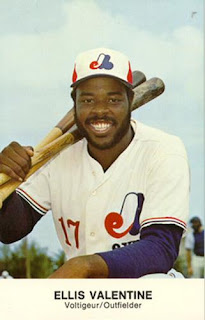 Bobby Valentine - Though a major league player for several teams in the 1970's: Dodgers, Angels, Padres, Mets, and Mariners, he is more known as a manager.  He managed the Rangers, Mets, and Red Sox, as well as a Japanese team for two separate stints.  His greatest accomplishment is perhaps taking the Mets to the World Series in 2000.  But for many baseball fans, he will always be known for trying to sneak back into the dug-out after being ejected by the umpire. Note the fake mustache. 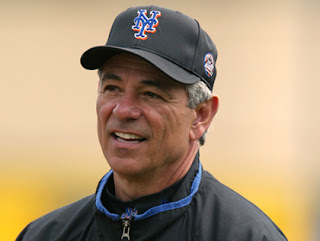 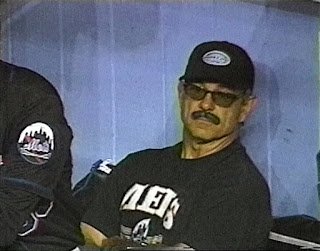 It is not believed that Ellis and Bobby Valentine are related.


Posted by Elliptical Man at 1:25 PM No comments:

It's that time of year again, so without further ado:


Neil Diamond and Barbra Streisand - "You Don't Bring Me Flowers"


Fleetwood Mac - "Go Your Own Way"